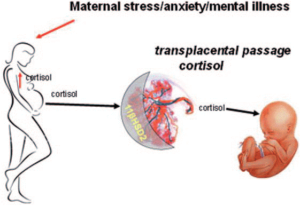 Do you know the conditions under which Maharaja Bharat Chakravarti who is credited with uniting India under his rule and from whom our country adopted its name ‘Bharat’ was born?

Maharaja Dushyant fell in love with Shakuntala, daughter of sage Vishvamitra and apsara Menaka, while on an excursion from his kingdom and did a gandharva marriage there. Having to leave after some time, Dushyant gave Shakuntala a royal ring as a sign of their love, promising her that he will return to her.

Shakuntala soon became pregnant with the offspring of Dushyant and in due time she gave birth to a son endowed with immense energy and strength. When he was merely six years old, her son had enough strength to tie up wild animals like lions, tigers, boars etc to trees near the hermitage.

So pregnant Shakuntala had a choice. She could have got overwhelmed with her present situation but she chose to give undivided attention and positivity to her unborn baby thus gifting our soil with none other than the great Maharaja Bharat Chakravarti Samrat.

DOES THE PRESENCE OF STRESS IN THE ENVIRONMENT AFFECTS THE FETAL GROWTH?

Objective Stress refers to the amount of hardship that a woman faces during a period of stress. This can be measured by the number of days that she is exposed to the stressor, the changes that occur to her daily life, and the losses she incurs due to the stress (e.g. money or property).

Subjective Stress refers to a woman’s personal reaction to the stressor and can be measured by assessing her emotions and feel- ings at the time that she was exposed to the stressful event.

It has been very well established that the fetus is primarily affected by the Subjective Stress and actually has got nothing to do with Objective Stress. Shakuntala had immense Objective Stress but it had no impact on Samrat Bharat in her womb. It is very important to note that even if the Objective Stress is very high till the time mother does not inter- nalize the stress the fetus stays unaffected. On the contrary even in the absence of Objective Stress if the mother creates stress on her own accord then it has fatal consequences on the baby in the womb.

Research findings have suggested that Prenatal Maternal Stress are associated with negative consequences in fetal and infant development. Understanding how Prenatal Maternal Stress is transmitted to the fetus requires some understanding of the human stress response system. When a person is exposed to an event that is perceived as stressful, the brain triggers a cascade of events ultimately leading to the release of stress hormones, such as Cortisol. Cortisol is an important tant component of the stress system in human which help prepare the individual to cope with the stressors. During pregnancy women have naturally elevated levels of cortisol which under particular stressful conditions can reach abnormally high levels. However, it has been demonstrated that in pregnant women, these hormones have the ability to pass from the mother to fetus via the placenta. This is supported by studies that have found high maternal cortisol levels to correspond with high fetal cortisol levels. Exposure to high cortisol levels can then pose negative consequences to the developing fetus. Moreover, it has been demonstrated that in-utero exposure to high levels of cortisol also affect post-natal development.

WHEN IS FETUS MOST SUSCEPTIBLE TO PRENATAL MATERNAL STRESS?

Timing is everything, especially for the effects of Prenatal Maternal Stress (PNMS). New research findings show that the first two trimesters are the most sensitive to Prenatal Stress. Two periods are especially crucial :

At week 10, the embryo becomes a fetus and it begins to move. The vital organs now have a solid foundation. During this time, the brain will produce almost 250,000 new neu- rons every minute. This is called neurogenesis

During weeks 24 and 30, nerve cell connec- tions are occurring. Guided by chemical signals, nerve processes seek out their target and establish contact. Communication between neurons begins. At birth, there are an excess of nerve connections, those that are not used will degenerate. This is called synaptogenesis.

Exposure to extreme stress during these critical periods of pregnancy will influence the developing structures and therefore deter- mine the physical, cognitive or behavioral outcome.

EFFECTS OF STRESS ON FETUS

Recent research findings have demonstrated that obstetrical complications like pre-term delivery, low birth weight and delayed physical development may all be influenced by Prenatal Maternal Stress. Moreover, the exposure of an expectant mother to stressful situations can influence the cognitive, behavioral and physical development of the children. Such children may show difficulties with pay- ing attention, and have aggressive attitudes. In addition they may show an increased risk of other mental health disorders, such as autism and depression.

The mind of the expectant mother and her child in the womb is totally synchronized. Whatever the mother is thinking and feeling is going directly to the child. The baby thinks & feels exactly the same way as the mother does. Thus the only emotion that the mother should have is that of love, bliss and happiness. The idea is not to run away from any emotions or thoughts, but to acknowledge them and make them constructive.

Expectant mothers need to keep a constant check on their thoughts and emotions, then they can avert diseases even before they affect them at the physical level. Happiness is the key to good health. When one is happy then they secrete Endorphin, Dopamine, and Serotonin – the happiness hormones that keep all our diseases at bay.

So an expectant mother should experience one and only one emotion during her pregnancy – The Emotion of Happiness. Rest all can WAIT!!!